Touch is the first sense that we develop when we are born.
The right kind of touch can lower blood pressure, cortisol levels, and heart rate.
The AromaTouch Hand Technique uses light, consistent touch that creates a beneficial response in the recipient.

The Aromatouch Technique is a combination of two of the most powerful senses, used in conjunction to establish one simple way to give those you care for an individual essential oil experience. Just because it’s simple doesn’t mean it isn’t profound. Whether it’s offering a hand technique to a new acquaintance or a full AromaTouch Technique to a family member, the olfactory and sensory stimulation induced by volatile aromatic compounds and human touch is a scientifically validated means to developing a strong connection with someone and positively influencing their well-being. 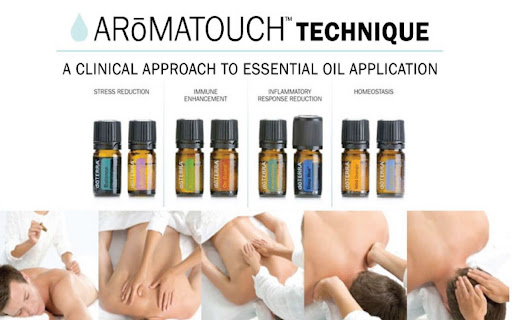 • Touch is the first sense that we develop when we are born.

• The AromaTouch Technique uses light, consistent touch that creates a beneficial response in the recipient 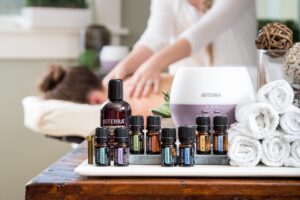 The AromaTouch Hand Technique is a simple and effective way to promote well-being and build powerful connections through the experience of essential oils. Plus, it can be given almost anywhere: a plane, the workplace, a park bench, the café, before bedtime, you name it! The movements in this technique are simple, yet they deliver a powerful wellness experience.

The AromaTouch Technique is all about creating an emotional connection and the science behind that connection is as validated as it is compelling. Tactile communication is our first form of communication. We begin receiving tactile signals in the womb, and then touch plays a critical role in parent-child relationships before verbal communication is possible. It is, in essence, the first sense we acquire and it is astonishingly effective. In recent studies, researchers have shown that emotional communication is very effective through touch, nearly as effective as words and facial cues. Not only is touch able to communicate the tone of emotion (whether it is positive or negative, intense or subtle), but it may also allow for precise differentiation between types of emotion. With voice and facial cues, we can identify just one or two positive signals that are not confused with each other. Research has exhibited that touch can communicate multiple emotions—love, gratitude, sympathy, fear, anger— with astounding exactness. This effect isn’t just limited to loved ones; another study found that touch communicates emotion nearly as effectively when it occurs between strangers. While our understanding of the mechanisms involved with touch and emotional messaging is still limited, we do know that it can be more effective than even verbal communication in strengthening existing bonds and developing new ones.

Along with the emotional component, gentle touch can also influence physiological responses in ways other communication simply cannot. Unlike massage, which involves powerful hand movements that are focused on specific outcomes (breakdown of muscular adhesions, stimulating the central nervous system, aiding recovery, etc.), the gentleness of an AromaTouch Technique has a much different spectrum of benefits. Tender touch almost instantaneously activates the release of oxytocin (often referred to as the “love” or “hug” hormone), decreases heart rate and blood pressure, and has a beneficial influence on multiple other stress-sensitive systems. Furthermore, the person initiating the contact generally experiences the same response as the person on the receiving end. Unlike a massage, the benefits of giving an AromaTouch Technique to someone can be just as powerful as receiving one. 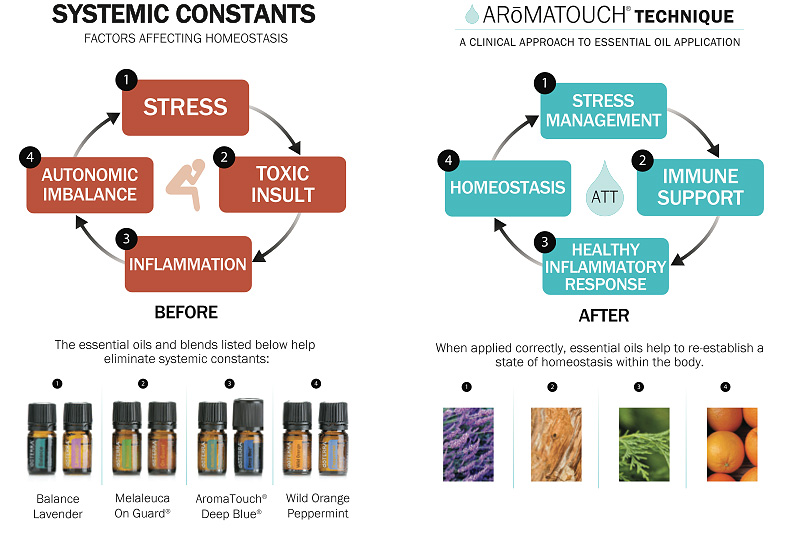 Another study produced by doTERRA researchers is fresh off the press. The new study, a clinical pilot trial published in the Journal of Integrative Medicine and Therapy, investigated the benefits of the AromaTouch® Technique. The AromaTouch Technique is a unique essential oil application method developed by Dr. David Hill, doTERRA founding executive and Chairman of Scientific Operations. The technique is an essential oil application that combines a moderate touch procedure with eight of doTERRA’s most powerful oils and blends. Read more about the AromaTouch Technique here.

To get an idea of both the short-term and long-term benefits of the technique, the researchers evaluated the effects on the body immediately after volunteers received just one technique, and they also measured the lasting effects on the body when the technique was administered regularly for an extended period of time. In addition, two groups were used in the experiment. The treatment group received the AromaTouch Technique exactly as described in the protocol developed by Dr. David Hill. A control group was comprised of individuals who received the AromaTouch Technique with every condition the same, except that Fractionated Coconut Oil was used in place of the eight essential oils normally used in the technique. See Figure 1 below for a schematic diagram of the experimental design.

The researchers measured heart rate, blood pressure, mean arterial pressure, and took saliva samples, which were analyzed for cortisol (a stress hormone) and other biomarkers of health. Volunteers also filled out a subjective questionnaire that indicated their current state of mind.

Both groups experienced decreases in heart rate, mean arterial pressure, diastolic blood pressure, stress scores, and salivary levels of cortisol immediately after the first AromaTouch Technique. But overall, the changes were more pronounced in the group that received the AromaTouch Technique with the essential oils. Although the study comprised a small sample size, the differences over the long-term did achieve statistical significance.

These results suggest that the AromaTouch Technique is an excellent way to immediately reduce feelings of stress and promote relaxation. When administered regularly, it is also effective at promoting sustained results in the body over the long term. This research study provides strong evidence supporting the benefits of the AromaTouch Technique. If you’d like to see the study results in greater detail, you can access the full-text study for free on the publisher’s website, since the Journal of Integrative Medicine and Therapy is open-access.

All Aromatouch Technique information was taken from the official doTERRA website.

Book your Aromatouch Therapy session with me today

Emilie Almontes is an energy healer and an artist based in Montreal, Qc.